Quite a few van manufacturers use ‘spring assisters’ to support the base spring, especially on models which have low load heights or are usually run full or part loaded.

Typical examples include motor homes, which use the basic chassis/cab with quite a heavy body, and vehicles such as the ‘tool van’, which always have a fair amount of heavy stock on board.

Spring assisters are usually either extra leaves (more common to heavy goods vehicles) or rubber/ polyurethane cones – also known as Aeon springs (more common on the types of vans we see for MOT testing). Both types act by stiffening the suspension once deflection of the base spring reaches a certain point, affording maximum comfort whether the vehicle is empty or loaded.

On vans, the preferred method is to use a rubber cone, which keeps unladen weight down and allows a low load height. These cones look like oversized rubber bump stops but work in a different way. The centre of the cone is hollow (see Fig. 1) and when the suspension oscillates, the rubber compresses – effectively dampening the spring oscillation. The compression rate is progressive until eventually – at full load – the cone is fully compressed and then acts as a bump stop. When the suspension rebounds, the cone decompresses and re-forms to its natural shape. 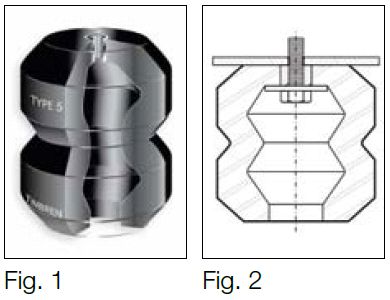 Because of their size and design characteristics, these cones may sit very close to or even on the base spring (see Fig. 2), yet the suspension appears to be in its normal running position. This is, in fact, a design feature – but some testers interpret it as a failure under IM 2.4A1: ‘inadequate clearance between bump stop and chassis or a suspension unit so weak that the body or other part of the vehicle fouls a road wheel or would do so if the vehicle was laden’. Before failing a vehicle under this RfR, testers should first determine if a spring assister is fitted, and whether the suspension really is so weak that the body would foul a road wheel.