It’s been a while since we’ve put out a new edition of our MOT horror stories. But, seeing as it’s Halloween, we thought we’d show you some of the more horrific and scary things MOT testers have found over the past few months.

Some of them might make your hair stand on end! 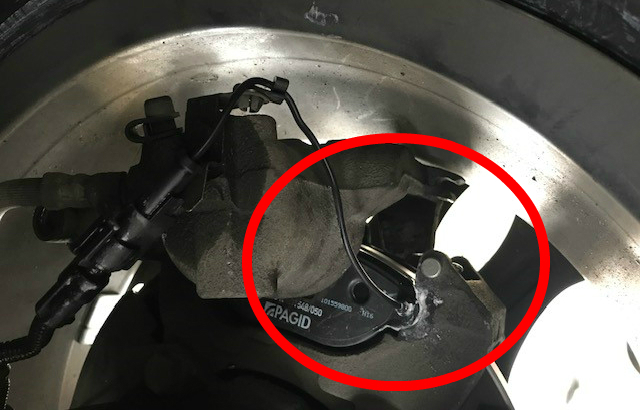 Our first scary story is of a brake caliper pin that could have had serious road safety implications.

Callum sent this image to us after a customer brought their Fiat 500 in for its MOT test. The nominated tester failed the vehicle for low front brake pads.

The customer told the tester they’d have new pads fitted elsewhere, and then bring the car back into for retesting. When the car was retested, the tester found the pin had quite obviously missed the caliper, causing it to be insecure.

This might’ve been accidentally missed by a professional mechanic but it’s more likely the new pads were fitted by an amateur mechanic, possibly a friend of the customer.

Either way, if the nominated tester hadn’t spotted this, it could’ve seriously reduced braking power, putting the driver and other road users in danger. 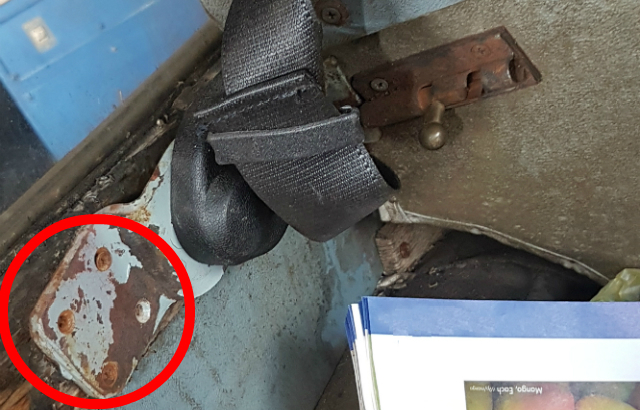 Our second terrible tale concerns a seatbelt that could have detached from its mountings at any moment.

Luke sent us this photo of a Morris Minor with a dangerously unsafe seatbelt that he had in for testing.

The rear seatbelt had been screwed onto the wooden frame of the car, which was pretty worn and decayed.

The problem was that there was only 1 screw holding the seatbelt in place! The 3 other screw sockets were empty.

If the car was involved in a crash, there’s a good chance that the single screw holding the seatbelt in place would fail. To make matters worse, the seatbelt was securing a child seat. If the tester hadn’t spotted this, it could’ve given way in a crash, possibly resulting in the injury or death of a small child. 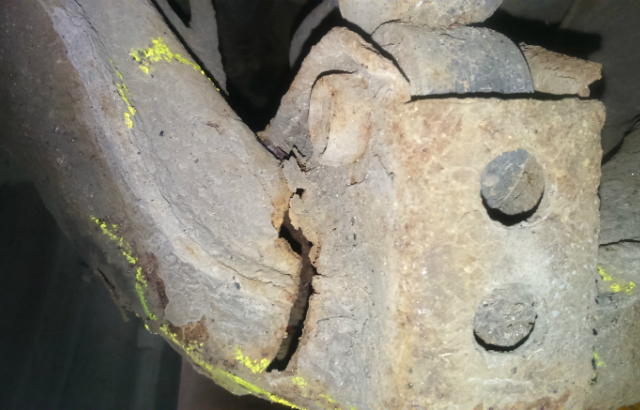 Our final frightening yarn relates to a cracked axle and wobbly wheel that could have seriously endangered the driver and other road users alike.

The photo above shows a badly corroded rear nearside axle on a 2001 Nissan Micra.

After the tester had identified this damage to the axle, they carefully lowered the car down to the ground and then parked it in the garage forecourt. This is what the wheel looked like! 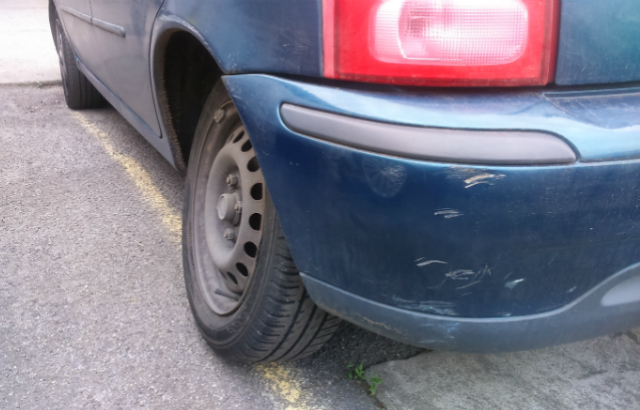 Thankfully this happened at an MOT garage but the customer who brought this car in had been driving around in it in the days leading up to its MOT test! If the wheel had failed like this while driving, it could’ve put the driver and everyone else on the road in serious danger.

Luckily, all of these vehicles were caught before they could do any damage. Things could have been much worse, and much scarier if it weren’t for the good work that MOT testers do up and down the country.